John Moore, a shipwright at Mare Island during much of WWII, loved to do two different things: build and repair boats and play his trumpet much like a professional musician would if he had had the opportunity.  John thought that personal satisfaction for he and his wife, Elvera, would be to get into the marina business, a place where he could go into business for himself repairing wooden boats, a place where he could build covered berths as he envisioned, and a place where he could someday have a floating restaurant with a “big band sound” much like was present in southern part of the US.  John accomplished his goals.At the time John was searching for a site to build his marina several matters were important to him: 1. For business reasons he wanted his marina to be in the middle of the Delta where  there was considerable boating activity; 2.  As a boater he wanted currents to be minimal and he wanted a site literally out of the wind ; and 3.  He wanted tenants in his marina to be able to enjoy the natural setting of the marina, thereby providing an “escape” for city dwellers who simply wanted to get away.  A visit to Riverboat Marina will show that he accomplished his goals.John Moore had a legacy few people knew about and it included:

Soon after the Riverboat opened for business in 1966, John decided to lease the boatyard to two friends he had at Mare Island, Julio and Silvio Focaracci.  A piece of paper was found, the lease amount was stated to be $250 per month, it was signed, and 17 years later and in 1984 when the Focaraccis retired, their last lease payment was still $250 per month!

Both John Moore and Julio and Silvio Focaraccis retired in early 1984, and Ken Scheidegger and his family took over ownership of Riverboat Marina and Delta Boat Works at that time.  They are determined to continue on with tradition established by others beginning over 50 years ago.

In 1991, Delta Boat works upgraded the boatyard overall, including construction of two large metal buildings, a 10,000 square foot concrete work area, and a travel lift with a 35 ton capacity.  Skilled boatwrights continue to provide quality service in a boatyard noted for its overall friendliness.

The owners of Riverboat Marina, Ken and Laura Scheidegger, are determined to ” fight the fight” to improve the Delta’s overall identity and future while at the same time helping people discover the Delta and realize why it is California’s most important resource area.  They have created the Discover the Delta Foundation (DTDF), a 501 (c) 3 nonprofit organization, and they are well on their way to gaining necessary support to build an Educational Center on five acres of land just to the east of the Rio Vista Bridge.  The Center is expected to have 1500 visitors per day and many believe it will be a Delta attraction much like the Monterey Bay Aquarium is to the Central California coastal area.

An integral part of the DTDF Project is sustainability and the creation of a team willing and able to support the Delta and its future.  DTDF created a Membership Card Program, and it involves Delta area businesses agreeing to support the DTDF Project by offering card holders discounts on the businesses services or products. Presently there are about 200 businesses and 1100 members,  and the goal is to have 400 businesses and 20,000 members by this time next year.  Each card costs $25, and its good for one year.  Each new tenant at Riverboat Marina will be given a card.

What’s this mean in a financial sense?  More than you might realize.  For example, you’ll receive 10% off the price of your dinner at Moore’s Riverboat Restaurant; 10% off the haul out fee if you are a customer at Delta Boat Works; and various other discounts at the Marina businesses noted above.  Not long ago one couple wanted to renew their card asap. Why?  After buying their cards last year, they went to Abel Chevrolet to have a major repair done to their car (10% off a $800 bill was $80); went to Lira’s Supermarket for groceries (5% off a $90 was $4.50).  Nice savings with a DTDF card in one day!  This is a win-win-win situation, and you’ll be joining a much needed Delta Project at a critical time. 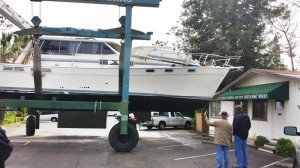